Prologue: The Need
Dan Reetz thought to himself, “I have this great idea for a large camera, but I need to have the tools to use the camera before I build it.” Dan had been collecting the cameras and other parts for awhile before I’d met him. Once he told me about his idea, we decided that the project was within reach and went for it.

Our plan was to design a program that could display the additional information captured in such a fashion; and to do so we needed some data. So we built a “slide-type” camera, and made a set of overlapping images of a few different scenes for an initial dataset. 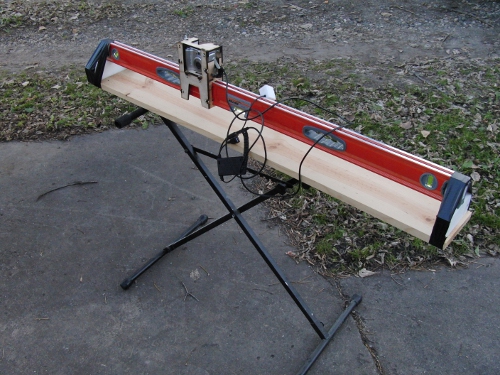 Step 1: The Method
At the workstation, Photoshop is fired up. Dan’s intuition is to pick the object we want to focus, align all images so that feature is centered in each image, and then take the mean of all the images. Success! We’ve refocused the scene! We also experimented with the mode, median, etc. and found the mean and median to look the best.

Step 2: Emulation
My task now was to perform the same tasks in a manner that was repeatable on any suitable dataset.

These lead me to choose a graphical language of some sort. I decided to use OpenGL (used in 3D games and applications) and the GLUT toolkit (OpenGL extensions for keyboard, mouse, window, etc. control). I chose them for two reasons: cross-compatibility, and familiarity.

Using OpenGL allowed me to take advantage of the blending modes and the ability to set the transparency of an object to perform the “mean” of the images without an intermediate processing step.

A problem was therefore introduced: I would want to make big rectangles and display (texture) the images on them for speed and efficiency reasons, but OpenGL expects texture dimensions to be in powers of two, meaning we couldn’t use any input image we wanted without preprocessing them first. (I actually built an initial attempt that sampled the image and made thousands of little “pixel” rectangles, but this method was very slow and memory intensive, i.e. over 2GB of RAM)

Of course, others wanted to texture arbitrary images as well, and the problem had been solved quite a long time ago when graphics cards began to support the GL_TEXTURE_RECTANGLE_ARB extension; this allows textures to be any dimension, among other things.

All that remained was to implement the steps to calculate the refocused scene. By a stroke of luck our initial attempt worked very well; at first we didn’t realize that it’s success was due to the careful manner in which we had taken the pictures.

Step 3: Fire-fighting
We now had a working program, but it wouldn’t perform correctly on some of our data, confusing and frustrating us.

It didn’t take us long to root out the problem; once we had the data open in a viewer we noticed that some datasets were aligned very well while others were not. We quickly did a manual alignment in Photoshop on one of the problem datasets et voilà!

Epilogue: Onward
The core of the application hasn’t changed since. It is a major pain to manually align each dataset however, I’ve begun work on a rewrite that aligns the images in the program, instead of relying on the user to do so before hand.

Now that we’d completed our tool, we could see what our plenoptic camera was seeing. We now had a flurry of questions to answer:

So we march on.

Send me an email, then I'll place our discussion on this page (with your permission).